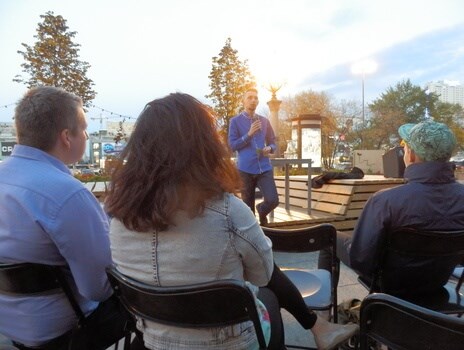 On 10th September, as part of the popular science meetings cycle “Find out on Plac Defilad”, our lecturer Damian Sojka talked about genetically modified organisms. The participants of the meeting had an opportunity to seek answers to such questions as, among others, what GMO is, if we see our present while watching SF films, and if the genetic revolution is passing around us almost unnoticed.

The surveys carried out for the Copernicus Science Centre indicate that genetically modified organisms, called GMOs, are still a great mystery for a half of all Poles. The surveys also show that apart from the term GMO, the second half of the population knows very little about genetic modification and bases their opinion on controversial issues publicised by the media. That is why many institutions and scientists try to respond to the needs of society and extend their knowledge, proving that the devil is not as black as he is painted.

Damian Sojka began his presentation by surveying the participants: if they support GMO initiatives or if they are rather against them. The participants varied in opinions and expertise, as among them were many scientists but also individuals who simply like to have the knowledge. The lecturer himself refrained from giving a clear opinion on this subject and explained the issues bordering on genetics and medicine instead. How to grow transgenic plants? Can you hear colours if you cannot see them? Why did the production of a genetically modified rice variety which could fight famine in Third World countries fail? Damian did not avoid answering the questions and responded to them.

As expected from a young scientist, he carefully uncovered secrets of engineering and genetic therapy so that the participants could form their own opinions. There were also controversial subjects. Artificial improvement of genes from generation to generation, so-called eugenics, evoked extreme emotions among the participants. Everyone could express their opinion, often quite the opposite, which resulted in a heated debate. “Find out on Plac Defilad” is a series of meetings during which the winners and finalists of FameLab Poland speak in a simple way on a chosen topic. FameLab is an international outreach competition organised by the Copernicus Science Centre and British Council, which aims at encouraging young scientists to speak in public.