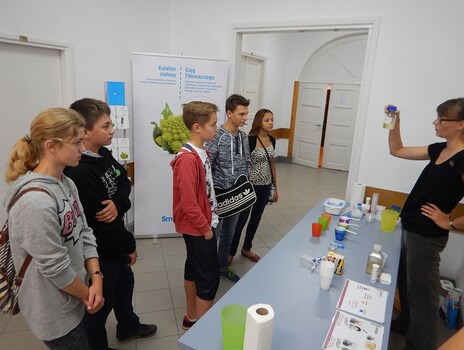 How to remove lactose from milk? What is catalase? In what processes is it used by living cells? How to professionally plan scientific experiments? These and many other questions were answered by science popularisers from the Centre for Innovative Bioscience Education (BioCEN) during the 19th edition of the Warsaw Science Festival.

The Centre for Innovative Bioscience Education ran experimental workshops entitled “BioCEN Reactivation” for children and youth on Saturday, 19th September, during the 19th edition of the Warsaw Science Festival.

Each and every participant could find something interesting. The younger were observing how the colour of red cabbage juice changes depending on the change of pH induced by easily available substances, such as citric acid or baking powder. The older could face the challenge of a riddle. The task was to establish genetic consanguinity by conducting an analysis of DNA fragments separated by means of agarose gel electrophoresis.
The children and youth that participated in the “BioCEN Reactivation” workshop enjoyed experiments consisting in enzymatic removal of milk sugar (lactose) from milk and isolating their own DNA from the inner cheek swab the most. Six different stands in total, at which participants made their first steps in independent experimental work, were made available to the visitors.

Finally, the participants became acquainted with principles of the 2nd edition of the ADAMED SmartUP programme that started on 1st September this year.

But it was not the last word of ADAMED SmartUP during the Festival! Jerzy Szuniewicz, our ambassador, and Anna Kosińska, project manager of the programme, will be speakers during the “Young innovators – how to change the world?” workshop held on 26th September. More information can be found at: http://festiwalnauki.edu.pl/spotkania/mlodzi-innowatorzy2015.