The Magnificent Ten, or the grand prize laureates of the 1st edition of ADAMED SmartUP 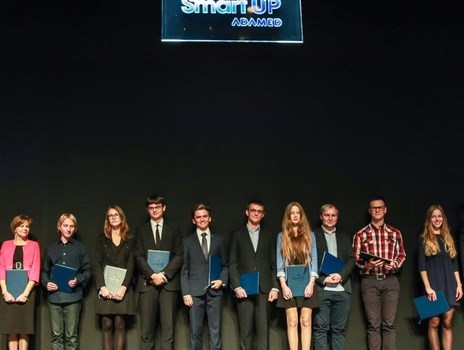 A gala summing up the first ADAMED SmartUP scientific and educational programme was held on Thursday, 8 October at the Syrena Theatre in Warsaw. At the gala the 10 main award laureates were announced, to be provided with an individual tutoring programme. The awards were presented by the representatives of the Scientific Council of the Programme, while the guests included representatives of the best Polish universities, the government, business and education.

Over 5.5 thousand candidates applied to the programme and faced a multi-stage recruitment process. To get to the final ten, the young science enthusiasts faced surprising puzzles and unexpected plot turns in a scientific game, took an online knowledge test and met the Scientific Council of the Programme. In the following year, the Council selected 50 participants of the science camp that took place in July this year in Warsaw. Based on factors including commitment and achievements during the camp, motivation to learn and interview evaluation, 10 laureates were selected to be included in an individual tutoring programme.

Who’s in the final ten?

The laureates of the first edition of ADAMED SmartUP will concentrate on planning further scientific development under the supervision of experienced scientific counsellors. After 10 months, those with the greatest potential will receive scholarships tailored to their individual needs.