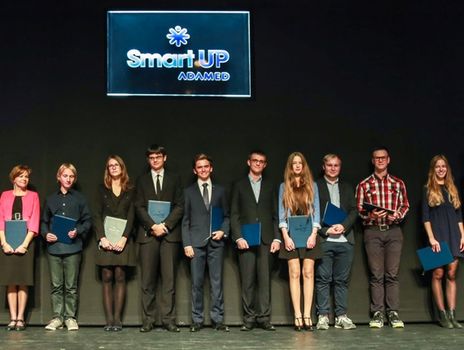 First places in competitions and Olympiads (both national and international), offers to study at prestigious universities abroad and original research projects are only some of the achievements of the grand prize laureates in the scientific and educational ADAMED SmartUP programme. Thanks to the individual educational tutoring offered as part of the grand prize, which included professional mentor support and additional academic classes, the exceptionally talented youth was given considerable help in developing their scientific careers.

The results of the 1st edition of the ADAMED SmartUP programme were officially announced in October 2015. To become one of the laureates, the young science enthusiasts faced surprising puzzles and unexpected plot turns in an internet scientific game, took a knowledge test and met the Scientific Council of the Programme during the recruitment interviews. The 50 best participants of the programme went to an innovative science camp, and from among this group – based on e.g. the recruitment results, level of commitment and achievements during the course, motivation to learn and final interview – 10 grand prize laureates were selected. They obtained a possibility to benefit from the individual educational tutoring programme.

Actually, it is not just another cup, diploma or financial support, but a long-term investment in the knowledge, skills and further development of your interests. The experts cooperating with the Adamed Group Foundation, who organise the tutoring, ensure that it not only meets the highest education standards, but also has a truly unique character. The content, form and manner of providing scientific assistance are tailor-made to suit the specific needs of every programme winner.

Please find below information on the selected forms of educational tutoring provided to particular ADAMED SmartUP laureates, along with their opinions and descriptions of their achievements:

The most talented laureates will be given scholarships for further education by the Adamed Group Foundation.
A chance for the next young talent
The registration to the 3rd edition of the ADAMED SmartUP programme is already scheduled for September.
If you want to have an incredible scientific adventure and gain the chance to pursue your passions as did last year’s laureates – apply!