Most people check the boiling time of a soft-boiled egg on the Internet, ask their mums or know best how long an egg should splash around in boiling water. A true physicist, however, puts his/her full confidence in the might of science and doesn’t need any help from some internets. A true physicist calculates the boiling time of a soft-boiled egg him- or herself!
How do we calculate it? As usual in physics, we need to start by making some assumptions. Also, it’s best for these assumptions to simplify our issue as much as possible. So let’s cheerfully assume that an egg is a perfect homogenous sphere, with an M mass, a c specific heat, a ρ density and a κ thermal conductivity. Oops, I can already hear angry murmurs and voices of protest that such eggs don’t exist. Well of course they don’t, but let’s try and ignore it for a while. An egg does resemble a sphere, and if we look at the parameters of the white and the yolk, it turns out that their specific heat, thermal conductivity and densities are very similar. This means that these assumptions are not that far from reality. What about the shell?
Forget about the shell! It’s thin, puny and we shouldn’t bother ourselves about it.
Look out, a formula!
We must think now about what it means to make a soft-boiled egg. As we all know, it means that the white solidifies, whereas the yolk remains fluid.
Such a state is possible because it only takes 60 °C for the white to solidify, whereas the yolk needs 65 °C. We want to boil the egg so that the temperature inside (in the entire volume of the yolk) does not exceed 65 °C. All we need to do now is to use the thermal conductivity formula, make some transformations and calculate how long it takes to get the egg to this state. Those of you who are interested in the details of these calculations can find them here (conducted by Charles D. H. Williams from the University of Exeter). What interests us most, however, is the final magical formula:

Looks scary? But there’s nothing to be afraid of! Let’s have a look. After the equals sign we see the parameters of an egg. These are ρ – density, c – specific heat, κ – thermal conductivity and M – mass. We can find their values in professional literature, such as in the Food Technology magazine.
In a quite “eggciting” little article (S.L. Polley, O.P. Synder, P. Kotnour, Food Technol. 34 (1980) 76-94) we can read that the white of a chicken egg has a density of about 1.038 g/cm3, a specific heat of 3.7 J/g*K and a thermal conductivity of about 5.4 *10-3 W/cm*K. From the same article we can also find out that a medium-sized egg has a mass of 57 g.
On the right side of our little formula there is also a natural logarithm (marked with the abbreviation ln), which is a great opportunity to remind ourselves what kind of an animal it is. We see that we have some temperatures under this logarithm. T egg (Tjajka) is the temperature of the egg before putting it into boiling water. It’s usually kept in the fridge, so we can assume that it’s 4 °C. If, however, we take a warm egg, fresh from the hen, the temperature will be higher, e.g. about 30 °C.
T yolk (Tżółtka) is the temperature at which the yolk solidifies. We already know that it’s 65 °C. Twater (Twody) is, as you can guess, the water temperature. Usually, we boil eggs in boiling water, so it would be the simplest to assume that it’ll be 100 °C.
Let’s grab a calculator and calculate!
We’ve got the data, we’ve got the formula, so let’s try to calculate something. The graph below shows the calculated time of cooking in relation to egg size in two cases. The blue curve represents the eggs taken out of the fridge, whereas the red one represents the ones kept at room temperature before boiling. The symbols at the top of the graph represent egg sizes according to the European standards (they can be found on egg boxes). 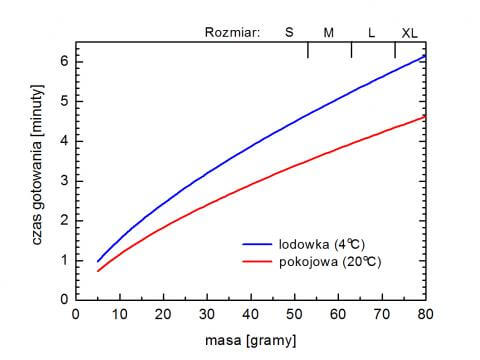 First, you can see that size does matter. Extra-large eggs need to be boiled much longer than small ones. This shouldn’t be a surprise, but the difference in boiling times is quite significant and may even amount to 90 seconds. Second, what’s very important is the initial egg temperature. As the calculations show, eggs taken directly from the fridge boil for about 90 seconds longer.
Let’s boil an egg on the Kasprowy Wierch Mountain
You can clearly see that boiling the egg on the Kasprowy Wierch Mountain (1,987 m a.s.l.) will take much longer than, for example, at the bottom of Budryk, the deepest mine in Poland (1,290 m below ground level). It only takes miners 4.5 minutes and bam, a soft-boiled egg is ready, whereas people in the mountains have to wait for nearly 6 minutes to achieve that same effect. We’d like to take this opportunity to send kind regards to people in Silesia and in the mountains, wishing the latter patience when boiling eggs for a longer time.
Finally, let’s think about the issue we brought up at the very beginning. We assumed for our calculations that an egg is a perfect homogenous sphere.
But we know very well that in reality this isn’t exactly the case. This begs the question: How does the shape of an egg affect its boiling time?
Does it make it longer or shorter? We’ll leave you with these questions, and in the meantime bon appétit!