You may not realise that you carry a very good ionising radiation detector in your pocket every day. It’s nothing else but … your cell phone. All it takes for it to start measuring radiation is to install an application created by two students of the University of Science and Technology (AGH).

How is it possible for an ordinary cell phone to detect radiation? Simple. Every modern “cell” has a digital camera, with its main part being a CCD or CMOS image sensor. These image sensors consist of many microscopic photosensitive elements which convert light into an electric signal. To simplify a little, the more light falls on such an element, the more electrons are released in it. The electrons are then counted and that is how we get the information about how much light fell onto the camera lens. It turns out, however, that not only light can release electrons in the photosensitive elements of the CCD and CMOS image sensors. 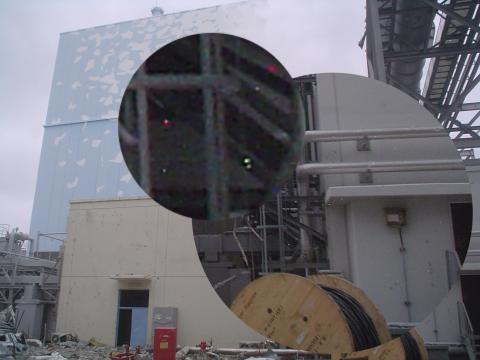 In order to better see these intriguing dots, you can darken the lens (for example, by taping it over with a black tape) and expose it to different types of radiation. This way the light will not fall on the lens and the dots, which are the traces of radiation, will be clearly visible. It turns out that what they look like depends on the type of radiation: 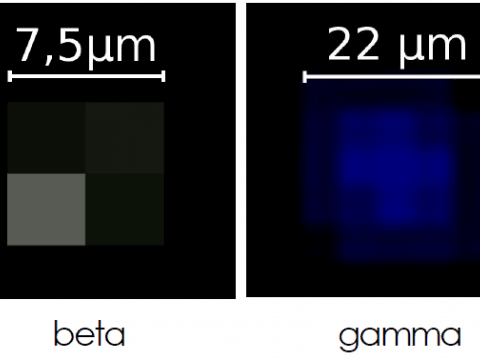 This means that cell phones cannot only detect radiation, but also tell us what type of radiation we are dealing with.

We might even go one step further. Nothing stops us from writing a program that could count the dots appearing on the images taken with a cell phone. If there are too many of them, the device could warn us that we are in an area with a too high a radiation level. This would be a simple radiation alarm, available for everyone.

The idea described above has already been implemented, and the application that changes a cell phone into a radiation detector is widely available in Google Play: Radiation Alarm. Its creators are two students from Cracow: Michał Gumiela and Rafał Kozik, and the video below demonstrates how the program works. The big thing in the background is the source of gamma radiation located in the Institute of Nuclear Physics of the Polish Academy of Sciences in Kracow. The control in the background informs whether the screen at the source is closed or not. If the light is green – the screen is closed, there is no radiation; if the light is red – the screen is open, there is radiation present.

The measurements show that it is possible to detect a radiation level that is more than around 10 μSv/h with widely available cell phones and tablets.
For comparison, the background radiation level in Poland is about 0,3 μSv/h, whereas the latest data from Japan indicate that the radiation level around the Fukushima nuclear power plant is currently about 100 μSv/h.

Finally, there is one more important piece of information. The idea to use cell phones, tablets, as well as digital cameras and webcams to detect ionising radiation comes from the previously mentioned young scientists, Michał Gumiela and Rafał Kozik. They are the ones who planned the measurements, conducted them and wrote the mobile application. Their project turned out to be so good that it represented Poland at the Expo Sciences International 2013 and the European Union Contest for Young Scientists, where it received an award in the physics category. Therefore, we can proudly quote a classic Polish comedy, Teddy Bear: This is ours, Polish, made by us, and it’s not our last word!

How can you learn to program?