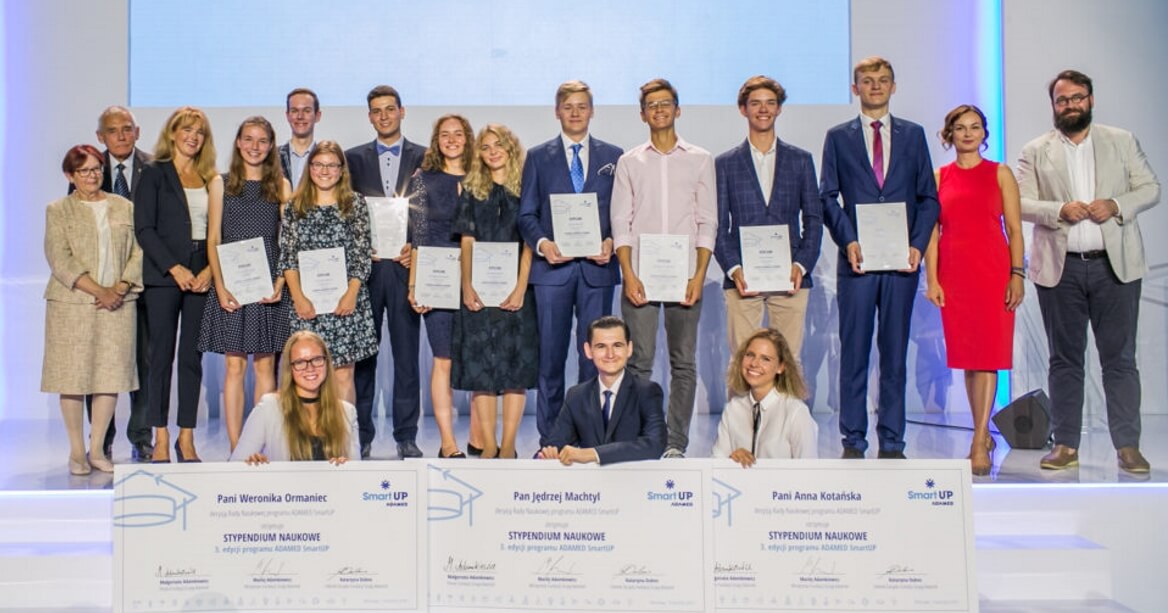 On 12th September this year, a ceremonial closing gala of the 4th edition of ADAMED SmartUP programme took place in the Auditorium of the Faculty of Physics at Warsaw University of Technology. During the event, we selected 10 laureates of the main award and 3 scholarship recipients.

This year’s gala was attended by many special guests, including representatives of the Ministry of Health, the Ministry of Foreign Affairs, the Polish Parliament, universities, and state institutions, as well as members of the Scientific Board and the Management Board of the Adamed Group Foundation. Naturally, ADAMED SmartUP participants were present as ewll and could count on a solid dose of positive emotions that evening.

The gala was inaugurated by Małgorzata Adamkiewicz, President of the Adamed Group Foundation. The official announcement of laureates and scholarship recipients was preceded by a brief speech by Minister Maciej Miłkowski, Undersecretary of State at the Ministry of Health.

Next, the names of the 10 laureates of the main award of the 4th edition of the ADAMED SmartUP programme were revealed. The lucky winners selected from among 50 science camp participants were:

The laureates will receive support in form of educational consultations and will be expanding their knowledge and skills under the supervision of experienced scientists for the next 10 months.

During this year’s gala, scholarship recipients of the 3rd edition of the programme were also announced, and the prizes went to Anna Kotańska, Jędrzej Machtyl, and Weronika Ormaniec. The Management Board of the Adamed Group Foundation and members of the programme’s Scientific Board presented the three distinguished individuals with symbolic cheques. The scholarship recipients will be able to use these financial rewards to fulfil their dreams through studies and scientific development.

Students who decide to enrol in the 5th edition of the programme between October and January, and who take part in the scientific alternative reality game, will receive a similar chance to develop their knowledge and skills.